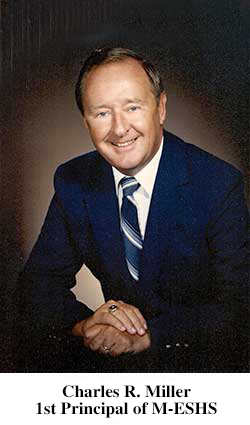 In celebration of their 50th Class Reunion, the Maine-Endwell Class of 1964 chose to honor Charles R. Miller, the founding Principal of Maine-Endwell Senior High School, for his devotion to public service by establishing the Charles R. Miller Public Service Legacy Award.  Mr. Miller, affectionately known as Charlie, hired the first staff and took part in the construction of the original high school.  He was an outstanding principal who was well liked by students, staff and community.  Charlie strongly believed in the first M-E Senior High School motto that said all students should become all they are capable of being.  He espoused that all of us should participate in our community in some way and that we all should consider careers in public service.  He lived his life this way and as a tribute to that life, the M-E Class of 1964 initiated this award in his name.

The M-E Half Century Scholarship Committee, as overseer of the Charles R. Miller Public Service Legacy Award, presented the first awards in 2015 to four deserving young women, followed by each subsequent year to at least one graduating senior who most emulates Mr. Miller as demonstrated by his or her participation in extracurricular and community-service activities. The academic achievement and the potential each of these young adults exhibit exemplifies the commitment to school and community Mr. Miller espoused. We know he would be very proud of them and their accomplishments.

How might you learn more about Charlie Miller, his purpose in life, his vision and the role he played as a public servant?  Click on the link below and discover the incredible life journey of Charles R. Miller.

Please note that the scholarship fund will incur a 3% transaction fee per paypal donation. Please consider adding 3% to your donation to cover this fee.